During the summer of 2016, I read this book (left) edited by Yasmin Kafai and Mitch Resnick. I was inspired by Chapter 4 (called Learning Design by Making Games). In it, Kafai described her study in which a group of 4th grade students spent one hour per day (over a six-month period) writing, designing and programming a computer game (using LogoWriter) for younger students to help them learn about fractions. One of the main conclusions of her study was that the students demonstrated a wide variety of approaches (top-down, bottom-up, and a mix of the two) to the complex task of game design. She also found that students learned things not only through the design task itself but also about design thinking as a concept.

Even though this study was about 25 years old, I knew the idea would still work with a modern class using MIT’s Scratch environment. I also knew it would be an empowering, design/computational-thinking project that would have strong connections to the mathematics curriculum content and processes. I was excited to see what current junior students could learn about design and computational thinking, and mathematics, from this kind of project. In early October 2016, I found a teacher (I support teachers in 26 schools) and a Grade 4/5 class who would take part. Starting in January 2017, we partnered with a Grade 2 class in the school (whose students became the target audience for the older students’ computer games).

It was initially planned as a year-long, project-based learning task. It would also turn into an inquiry about design thinking. We did not provide students with a pre-made roadmap for design thinking. Instead, we chose the constructionist route; students were invited to build their own concepts of a design process throughout the project and, especially, at the conclusion of the project through several consolidation and reflection activities.

It wasn’t feasible for the students to work on their project daily as in the original study. It turned into one weekly, 80-minute session. The whole process spanned a 9-month period at the school and unfolded in five phases:

Students in the grade 4/5 class developed basic literacy / competency programming in Scratch using creative learning and the MIT research-based approach utilizing “projects, passions, peers, and play.” Our objective was for students to take the time they needed to build enough fluency in Scratch programming so they would be ready for the design challenge of the fraction game.

The following video was recording in December, 2016, during Phase 1. This student was in the initial stages of designing his own Scratch version of the slither.io game:

Concepts such as variables and the Cartesian coordinate system are not part of the Grade 4 or 5 curriculum; however, most of the students gained a working knowledge of these concepts because they were essential mathematics needed to make the games and projects they wanted to create during Phase 1 (note: students had complete freedom to follow their passions and to choose their own projects in Phase 1).

Students learned the design goal (“design and write a computer game, using Scratch, that makes learning about fractions fun and easy for primary students.”). The students quickly realized that they lacked knowledge about the Grade 2 students. A 90-minute session was organized for the following week in which they proceeded to conduct interviews with students in the Grade 2 class. The Grade 4/5 class made observations of the Grade 2 students and their thinking about: 1. their current understanding of fraction concepts, and 2. what makes a computer game fun for them. After the 90-minute session, the Grade 4/5 students met as a class to debrief and compile a master document of observations, ideas, impressions, ideas and further questions. This information became the starting point for imagining what their game might look like.

This is page one of the document created during the debrief session (after the initial meeting time with the grade 2 students):

Students worked on their educational computer game product once per week for an 80-minute session. Each student has access to either a Chromebook, laptop or desktop computer. Once per month, the Grade 2 students visited and provided feedback on the developing games. In the image below, the older student is asking her younger grade 2 partner questions about what he thinks of the game: 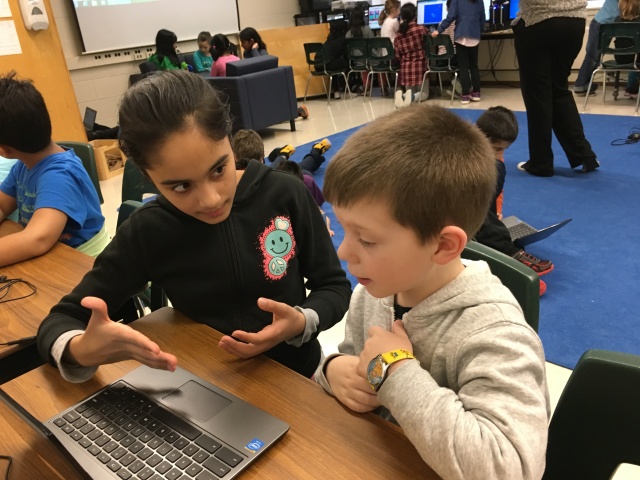 Grade 4/5 students blogged about the feedback from the younger students and on their own plans for their game. I interviewed the older students about both computational and design thinking concepts. Regular sharing and discussion sessions took place between students, face to face, and in online environments (Google Classroom site, blogging site).

Assessment during this, the longest phase, was tied to success, to educational goals and the instructional strategies used. PBL demands a flexible, reflective assessment framework.  Evidence of learning occurred through the collection and analysis of four key sources:

Grades were not assigned at any time within this PBL structure. Feedback, discussion, and peer collaboration were provided or supported in context and in situ that supported student learning and helped focus them in their pursuit of their projects.

One of our primary foci was to assess competencies: 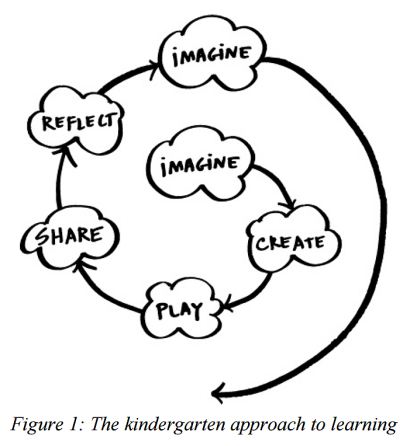 Students prepared for a special “Launch Day” for their computer game product with the Grade 2s. This looked very much like the monthly feedback sessions but the excitement level was at maximum.

After Launch Day, students collected final feedback from Grade 2 students regarding their games, how well goals were met, and how well feedback provided in earlier sessions was implemented into the game designs.  This Scratch studio still contains working copies of each of the fraction games (these were available, however, January – June, not just after Launch Day).

After Launch Day, students were involved in two collaborative consolidation activities and one major reflection activity regarding the “design process” as it applied to making computer games and as it applied/applies to future contexts in which they might see a need to apply design thinking to solve a problem.

Below is a sample of four reflections written by Grade 4/5 students (using their blogging site) during the final reflection activity. They were asked to respond to this question: “How could you use the design process that we [students] created together [during the collaborative consolidation activity] to help you design something else in the future?

“I could use the design process that we created to design something else in the future because designing games are very similar to designing other things. I would first think of an idea for what I am designing and then I would carry out the plan that I thought of. After I have a rough idea of what I am going to be doing, I would start designing. Once I have a first copy of my design, I would either go to other people for feedback or make it better myself depending on the situation. Then I would use the feedback to make my design better and come out with the final product.”

“I can use this design process for celebrations, designing football plays, or rearranging basically anything! This design process is a lot like many other things in life. Think, get feedback, do, fix, get feedback, do, fix, and repeat. Doing scratch is basically a life lesson. It teaches you to look over, and keep fixing. The activities I mentioned at the beginning of this paragraph, are examples the follow the same format of do, fix, repeat. That is how the scratch design process is like designing many other in real life activities.”

“I could use the process to make a city. it could be real or made from blocks. I could experiment with the blocks, sketch a rough idea and think of what It will look like. I will see who is in the city and make and build buildings and houses to suit them. I will ask the people who live in the city about how they want it to look and where they want it to be. I will plan and sketch out the city and fix any problems I may have such as one building too close to the other. I will make my city better and expand it. I will test it and go through each building and ask the people a final time about how it looks. then my city will be officially open!”

“The reflection process that we created can be used in many ways other than just scratch. For example, designing a custom chair. First you experiment with creating the chair. Then you ask the person that wanted you to make a chair how they want it to be made. Then you can imagine the way it would look. After that, you enter the design loop. You create, then ask for feedback, and then you reflect. Finally, you make your last improvements and ask what they think about the chair. If they like it, you were successful! Good Job. But this comes to show how the design process can be used in many different ways. Many other things that you can use the design process on are designing parties, bedrooms, houses, buildings, your new coffee recipe, your frying pan, your table, your couch, your cupboard, your computer, your balloon, your book, your floor, your building blocks, and even a plastic bag! This comes to show how many things you can use this process on.

2 thoughts on “Learning Design by Making Games (in Scratch)”